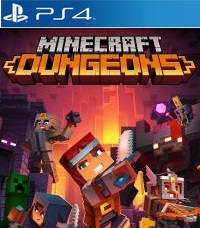 We start the game in Minecraft: Dungeons by choosing one of four characters. Since the characters do not differ in statistics or skills, we can only adapt their appearance to individual preferences. During the game, we observe the action from a bird’s eye view, and we traverse full of dangers and procedural generated locations (like dungeons, swamps and canyons), avoiding ubiquitous traps and fighting enemies. The combat system has an arcade character, and not only hordes of rank adversaries stand in our way, but also powerful bosses.