Crash Bandicoot 4 It’s About Time is a brand-new game in the Crash series that will pick up immediately after the events of Warped, which left villains Neo Cortex and Uka Uka stranded on a far-off planet. The creators didn’t forget about boss fights; they included my personal favorite, which causes me to hold my breath for several seconds, as well as chases, to create a cocktail that makes it impossible for me to leave the TV. 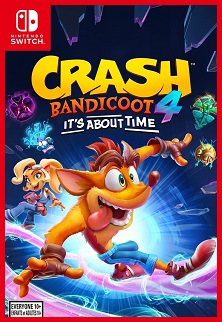 Like other Crash games, timing is everything. Players must jump, duck and slide at exactly the right moments to avoid enemy attacks and explore precarious, collectible-crammed levels. We have the familiar sequences here, which force us to move constantly and reward reflexes, as well as separate levels where we can impersonate other characters, giving the tired Jamaican a break. Character animations have been fine-tuned to perfection; the main character looks fantastic; it’s a joy to watch him; and as we wander, we come across various places, each with its own distinct theme and personality, as well as being vibrant. Though players can also control Cortex, his levels feel far less polished as the developers strip away the ability to double jump and force the player to use a blaster, despite frustratingly unreliable aiming.