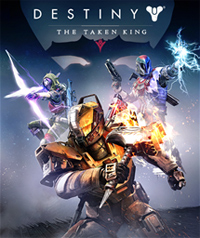 GAME OVERVIEW
Destiny: The Taken King is a major expansion for Bungie’s first-person shooter, Destiny. Along with an arsenal of all new gear, Guardians can discover and wield devastating new powers. Claim and master the Titan Sunbreaker, Hunter Nightstalker, and Warlock Stormcaller. Board the Dreadnaught. Face The Taken King. Destiny looks more and more like an MMO, and that seems to work well with the gameplay we already know.