Age of Calamity is a game due to be released for the Nintendo Switch on November 20, 2020. It is co-developed by Koei Tecmo and Nintendo. That game combined the massive battles of Dynasty Warriors with the lore and history of Zelda. The new game is set 100 years before Breath of the Wild, where players can experience the great calamity that influenced the events of BOTW. 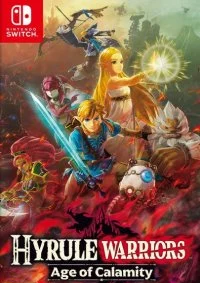 All Sheikah rune abilities can be used by any playable character, and they can be used to counter attacks from elite enemies. When there’s a charging Moblin for example, I can will a block of ice into existence with the Cryonis rune, stopping them in their tracks. The gameplay follows that of the previous Hyrule Warriors games, with players executing flashy combo attacks in “one versus one thousand” style battles. The story takes place during the events of the Great Calamity. This is a game dedicated to the people who wanted more from Breath of the Wild’s story, all told through a superbly tragic backdrop. It’s early hours in Age of Calamity, but this adventure is a surprisingly impressive transition of Breath of the Wild’s story and combat to a musou game.