King’s Bounty II is a strategy RPG featuring open-world exploration. The game will launch on August 24, 2021, for Nintendo Switch. You choose one of three classes in the game, and are required to make decisions which affect the overall story. Some will change your Ideal in certain ways, others unlock certain troops, others lock out certain questlines altogether. 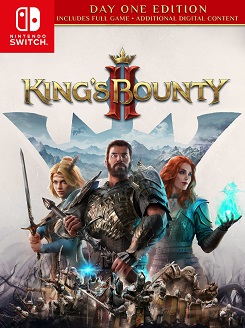 The ultimate aim of King’s Bounty II is to destroy the blight that has been infecting the land of Nostria. Whilst the cause of this is unclear, you will find yourself up against special Blight Enemies. These unnatural foes cannot be recruited to your retinue. Normally units can be recruited at vendors or as rewards for completing certain quests, but this is never the case for Blighted units. The infected enemies also use the deadly Blight Magic which you cannot wield. You’ll instead rely on other forms of Magic, such as Fire, Ice, etc. After defeating Blight Enemies, you’ll find that areas in the world previously infect with Blight have been healed, returning to their former glory. The game’s second section consists of turn-based combat in which our team of warriors, which is made up of a variety of various troops, meets dozens of different opponents.