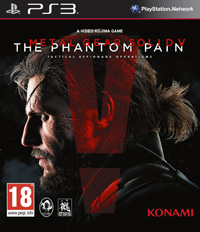 GAME OVERVIEW
Metal Gear Solid V: The Phantom Pain (PlayStation3) Metal Gear Solid V: The Phantom Pain is slated to launch for PS3 on September 1. The Phantom Pain is the final entry in the saga, and is at the very least going to be the last game in the series that creator and auteur Hideo Kojima will be working on. Gamers will be free to choose what missions they want to execute and when, selecting between night and day, weather conditions, and the state of enemy forces. In stark contrast, Kojima’s team will instead offer the player new ways of traversal and sneaking methods, such as taking a plane, helicopter or motorcycle to the mission area.